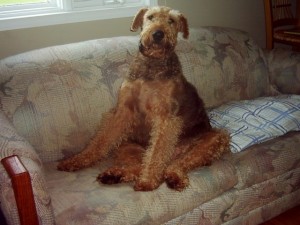 It was September in 2004 when I first heard about him.  Duke was in Calgary when I got the call that this oversized boy needed a last chance foster placement or he would be euthanized.  He had been with his second family who had adopted him through the SPCA.  They had no history other than knowing he was about 4 years old and then one day shortly after being adopted he had snapped at one of the kids.  The family felt they couldn’t keep him because of their children but felt it wasn’t Duke’s fault and he needed a last chance.  After having him assessed in Calgary, it was determined that this boy could be saved but he needed a special place where he would be trained and have lots of one on one time.  I jumped up and down and sent an email asking for him to be sent to me in Ottawa.

Sending an Airedale, let alone an oversized Airedale, on a plane is not something AireCanada ever does but this was a one shot deal.  This had to work or Duke was going to be put down.  Joanne Helm in Calgary took care of getting a crate and making flight arrangements while our treasurer Jim Scott tried to find the dollars to make this work.  One quick email out to all the Airedale lovers we knew and all the sudden funds for Duke were pouring in from across the globe.  We had enough money to fly this big guy and money to spare to deal with his sensitive medical needs.  Duke was hypothyroid and showed all signs of being a Plechner dog (http://www.drplechner.com/home.php) so we knew that he would use these funds quickly but that they would make a difference in making him adoptable.

Upon arriving in Ottawa  I was stunned to see this Airedale who was massive and looked like he was part hippo.  Little did I know that this boy was going to steal our hearts and teach me more than any other foster I have ever had. 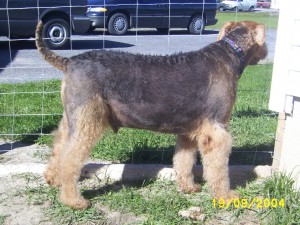 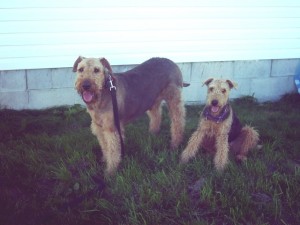 This is Duke with Groovy.  Groovy is a standard Airedale female weighing 55lbs 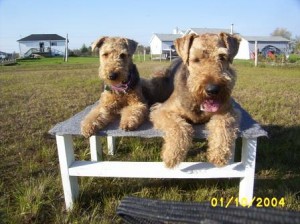 After visiting with our vet and starting Duke on the proper thyroid medication, our next task was obedience classes because he was a puller and was not sure about other dogs.  He passed with flying colours and learned not to dive through my legs and toss me head over heels.  He was so tall and I am a mere 5′ 2″  so that when he went through my legs he picked me up off my feet and I would half stumble and half ride him to regain my footing! 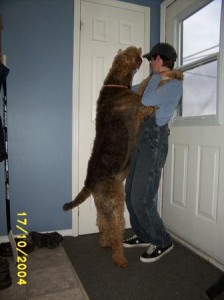 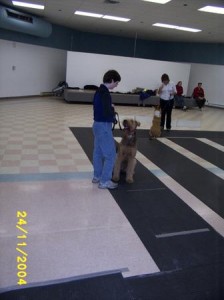 At that time I had 3 of my own dogs, a 15 year old Airedale mix, a 12 year old senior rescue (Bowfsie who was sooooo grumpy) and a young 2 year old Airedale female.  The young one, Groovy LOVED Duke.  They played and cuddled and chased day and night.  Bowfsie and Duke hated each other and we quickly learned that if Duke didn’t like something he made a point of letting everyone know about it.  After a major conflict between Duke and Bowfsie, poor Duke was relegated to living in a muzzle when loose with all the other dogs.

He had so much against him.  Who was going to adopt a big goofy boy with thyroid and hip issues who couldn’t be around children, probably could never live with another dog and who did what he wanted when he wanted.  Let me tell you, when a 120 dog decided to lay down in front of the fridge and not move, he doesn’t move! 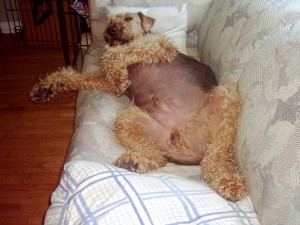 Duke had his own room with a crate.  He chose to sleep on the couch!

Well after 6 months of re-training and medical issues being dealt with, I got an email from Barbara Curtiss of NEAR (New England Airedale Rescue) with the perfect family for Duke.  She was so right!!  Dawn and Richard from Vermont drove to Ottawa to meet Dukey.  It was love at first sight.  They sat down on my couch and Duke climbed right up and laid across Dawn’s lap.  He picked them.   In March 2005 Duke moved to his new home and finally got to be the dog he was meant to be.   Boy did he live the life, I just about packed my bags and joined him. 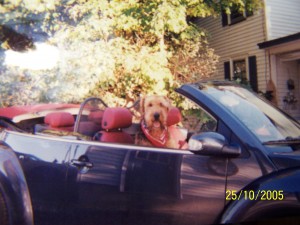 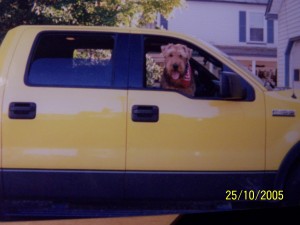 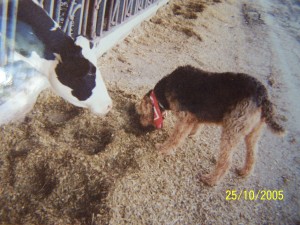 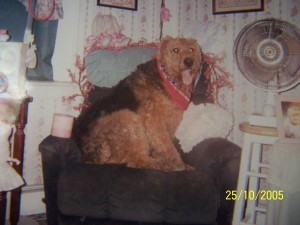 What amazes me to this day is that Duke traveled from Calgary to Ottawa to Vermont but his story traveled the globe as Airedale friends helped make his journey possible.  But now the tale comes to a conclusion.

It is with great sadness that today I received a call letting me know that the King has gone to the rainbow bridge.  His family helped him cross when he was no longer able to live a pain free life due to his hips and mobility issues.  We speculate that Duke was about eleven and a half.  He lived the best Airedale life.  He worked on the farm, he slept in his chair, he cruised around town and three years ago he began a new adventure raising an Airedale sister, Ruby who was his very best friend.  And most importantly he knew the love of a family who cared for him deeply.

My heart goes out to Richard, Dawn and family who gave Dukey so much love and care over the past 6 years. I can only hope that the joy he brought you over
your time together will live in your hearts and minds forever. My heartfelt thanks also goes out to all the friends who helped Duke on this incredible journey.

Thank you for touching so many of our lives Dukey.  You will stay in our hearts  always.

18 thoughts on “A Rescue Success from Beginning to End”